My House Caught on Fire (no kidding)

I have quite a few things to post, but I'll just post one thing for now. Why don't I post the most recent item first? Um... let's see... Oh, yeah! My house nearly burnt down yesterday and we lost almost everything. Everyone is safe and by some miracle I was able to salvage my computer (though, I've been told it'll probably die because of the acid in the smoke). 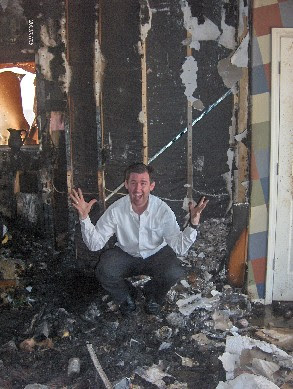 When I opened the front door, I saw a wall of thick smoke from the ceiling to the floor. I held my breath and ran in because I knew it was our new electric skillet that must have caused the smoke (I had just bought on eBay one of those "waterless" skillets that you can put on low for up to 18 hours, like a crock-pot. Mine must have been defective. All I can say is that the guy I bought it from is going to get an interesting review from me!). I didn't hear or see any fire. I guess I was dumb. I thought maybe I could just unplug it, but after a few steps (or crawls), I realized that the entire two-story house was completely filled with smoke (plus I couldn't see anything and the smoke went up my nose. Mental note: plug your nose next time you run into a house on fire), so I backtracked it out of there. I now understand how people can die just a few feet away from their doorway. It was nothing like in the movies, except for the aftereffects when we saw the damage. By some strange luck, the fire ate up all the oxygen and put itself out. Then like in Backdraft (the movie), it got superheated (so hot it melted our fire alarms into goo and popped the nails out of the drywall). Needless to say, the whole house and almost everything inside was ruined by the smoke, water hoses, and the firemen. One person roughly estimated the damages to be between $250,000 and $300,000, but we won't find out for a while what the real figure is. It'll probably take six months to rebuild.

Fortunately, 7 fire trucks showed up within minutes. When they opened the back door, the fire ignited again, but they were able to put it out pretty quickly. Half of our kitchen is gone, but the flames didn't get past the linoleum. We were VERY lucky the actual fire didn't spread. Our neighbors said they could smell the smoke for an hour before we showed up!

My wife had turned the skillet on low three hours earlier. Sad thing is that the skillet was an anniversary gift that she had accidently discovered, so I allowed her to use it early. I guess now she's getting a new kitchen instead for our anniversary (errr... Christmas, by the time it's all fixed). 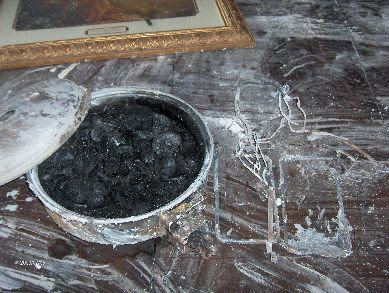 What's ironic is that a couple years ago when all those bad things were happing to us in a short period of time (i.e. I lost my job of 6 years, Alicia went to the hospital for a month while I started a new business working 20 hours a day and taking care of our 4 small kids, Jared was born with all those issues and had heart, eye, testicle, gastro surgery, Jacob took poison, Alicia split her pelvis and was crippled for a month, I lost a couple years worth of money because of a fluke incident with my new business, etc.), I told people that the only thing left was for our house to burn down. Looks like it just took a little time to happen. We're all fine, though. Just tired and frustrated. We hired a public adjuster to help "fight" the insurance company for us. Already, the insurance company is giving us grief. Can you believe when we called them up (about 3 PM on Sunday), they said someone would call us back by the end of the next business day?! Didn't even ask us if we had a place for our family of seven to stay for the night! They even ended the call with, "Have a happy day!" Yeah... as we watch the smoke billowing from our house. 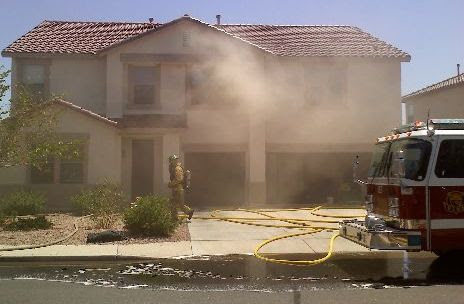 Posted by Matthew Peterson at 11:15 PM

Good grief, Matthew! How fortunate no one was injured.

penney said...
This comment has been removed by the author.
9:36 AM

OMG! I just read your newsletter. Thank God everyone is okay. I think you should sue those skillet people - they owe you a house.

I'm so sorry to hear this news. How devastating it must be to see your house in shambles. It's not only the house but all your photos and furniture and treasures inside. I've taken pix of contents and keep them in a separate location, but I could never replace the knicknacks and travel souvenirs and wedding gifts and art, etc. I do upload my photos to Snapfish now. As for the computer files, I keep a backup disk in my bank vault. You're fortunate you could recover the computer. My sincere sympathies. I hope the insurance company is cooperative.

we are praying for you ... Hope you family can stay together in one location though this.. and that kids can be with school and friends that they know.
Dona

That was so sad. I am glad you and your family are safe and well. Did you loose any or all pictures? When you loose those, you can't get them back.

What a terrible thing for your family to endure. Thank goodness your family is all safe and sound. It's not an easy task to rebuild, but at least it's do-able. Replacing possessions is possible. Replacing your loved ones is not.

OMG. Still, it was fortunate no one was home and none in your family got hurt.

Thanks everyone. The entire house is going to be gutted and redone. Thankfully, we have good insurance coverage. I'm SOOO lucky I was able to salvage my computer files. The paintings, on the other hand, are toast... literally, which is so sad, since we had individual portraits of our boys done by their grandmother who probably can't do them again because of her health. I will probably never redo the mural I painted on the boy's room either, since it took me two weeks and I am always so busy. Click Here to see what it looked like.

Twenty years ago a neighbor's house burned to the ground, and I can still hear the roar (Yes they do roar) and feel the heat. Even not being my house it was an experience I will never get over. I am so sorry you experienced it, especially on your home. Thank God it wasn't the middle of the night.

Glad everyone was okay. I hope the rest of your family is recovering well from the loss.
Also, congratulations on the book (I finally got around to reading it this last week on vacation).

Thanks. It's been 10 months now since the fire and we still have another 2 more months until the house will be finished. 1 year! Aaaah! It'll be nice to get back.

Don’t be too hard on yourself, Matthew. The important thing was you and your family are all safe and well. I know that dealing with this kind of unfortunate event is frustrating. But when you look at it on a different perspective, you and your family can have a fresh start at your newly renovated home.