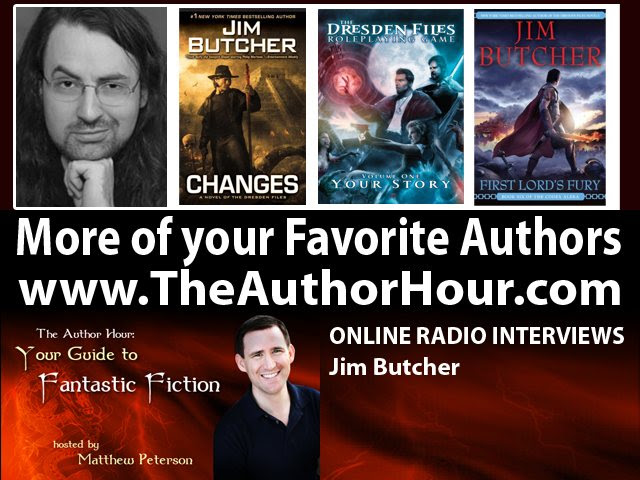 Jim Butcher’s interview aired on my show last week. He’s the #1 New York Times best-selling author who wrote the Dresden Files, which was adapted for TV on the Syfy (i.e. Si Fi) channel a while ago. I loved the show but it was cancelled after the first season, despite it doing very well with viewers. You can listen to Jim’s interview at http://TheAuthorHour.com/jim-butcher/

I don’t know how your Easter vacation was, but for my wife it ended badly. We were outside on the lawn when she suddenly jumped up and started hopping around yelping, "ouch, ouch, ouch!" I thought an ant had bit her, but upon closer observation I found a tiny scorpion. I was going to take a picture of it for the newsletter but someone smashed it into nothing. So the picture you see is not the one that stung her. It’s another scorpion that I killed in our garage when we first moved into our home a few years ago. It’s WAY bigger than the one that stung my wife. She felt the pain for several days. [see my newsletter for the picture]

We’ve been waiting for this moment for around three years now... Jared finally got his G-tube removed! If you asked him what it was, he'd say it's his "second belly button" or his "plastic belly button." We used that little thing to feed him. He no longer needs it! We've been so cautious for so long, it's going to take us some time to not be scared when we pick him up or hug him.

You can read more at my newsletter: http://www.paraworlds.com/newsletter/2010-04.php
Posted by Matthew Peterson at 10:34 AM