Almost a Book Sense Pick and other news about Paraworld Zero

I just got back from a 4-hour book signing at Bookmaster in Phoenix. There were about 10 authors there. I only sold 3 books, but seriously there were only like 8 customers the whole day, so it's actually a pretty good statistic. One lady asked for 10 of my flyers and a bunch of bookmarks so she could give them to her friends. I was able to mingle with another author who has the same PR company as me (Planned Television Arts) and she gave me some pointers for radio interviews. My publicist tells me that she has booked me for a national radio interview and a few regional ones already.

Borders emailed me yesterday to confirm to me that they would like to have me on Jan 19th. That's a great day, since I'll be interviewed on NBC Channel 12 in Phoenix that morning. What's funny is that Joe Dana, the news reporter who will be interviewing me, is having a hard time reading my book because his wife has been reading it. And he loaned his copy of Paraworld Zero to his babysitter. I just heard tonight that his babysitter liked it so much that she's been taking it to school and telling everyone to buy it. I sure hope Joe gets it back before our interview!

An interesting thing happened to me this week. On Sunday I prayed for help in getting my book onto the BookSense Picks list. Of course, I was assuming that it would be a few months before that would ever happen. I had checked my book on booksense.com a couple times and it wasn't even listed. The next day after praying, I checked booksense, and lo and behold, there was my book... with a Booksense Picks logo next to it! I couldn't believe it. If it were true, then that would mean 1200 bookstores would be buying my book and putting it on their websites and handouts. Almost a half a million flyers with my book cover on them would be sent out. I was excited but it seem too good to be true, since my book hadn't even come out yet. So I called up Booksense to ask them about it and they didn't know what I was talking about. 10 minutes later, the Picks logo disappeared from all of the bookstore websites. Bummer. It must have been a clerical error. I'm guessing that Booksense has something in their system with a checkbox that says Booksense Picks and someone accidentally clicked it on my book. At least some good came out of this... Now my book is listed on hundreds of independent bookstore websites! And who knows... maybe it'll get that Picks logo again in a few months.

This week, my book was finally listed with Ingram, Baker & Taylor, and Partners/West. Bowker Books in Print also updated their system. Barnes & Noble finally updated the incorrect info on their site (pub date, price, and page count were all wrong), so now that just leaves Borders (their info is still wrong). Oh, and the cover image for Amazon keeps disappearing. It's driving me nuts, so I'll list it here. 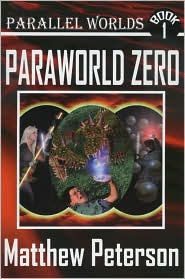 P.S. Happy Holidays everyone!
Posted by Matthew Peterson at 11:59 PM No comments:

Okay, so I am working like 18-hour days right now (21-hour days for the past 2 days... yes, that's correct... 3 hours of sleep for 2 days straight.), but I need to take a break and share with you four new reviews I got for Paraworld Zero.

"PARAWORLD ZERO is the first in a new series by Matthew Peterson. Its rollicking adventure style reminds this reader of a cross between Harry Potter's adventures and those of Artemis Fowl. Colorful characters, fast-paced adventure, and clever humor make this an interesting read."
Read the full review at Reading Junky
Note: this review also made its way to http://www.teensreadtoo.com/ParaworldZero.html

"Fantasy lovers will devour Paraworld Zero, book one of the series created by Matthew Peterson...

"Matthew Peterson uses descriptive writing and likable characters to capture your attention. I was completely intrigued on the first chapter! The world he creates is incredibly unique and captivating. The only thing I dislike about the book is that I'm forced to wait to hear more about Simon's thrilling adventure. I'll definitely be looking out for more by this author. "
Read the full review at The Page Flipper

"Enticing and very entertaining, Matthew Peterson creates in Paraworld Zero a very engaging and attention grabbing first novel that both me and my younger brother enjoyed, and had us fighting over who's turn it was to read the book. We'll be eagerly looking forward to the next in this funny, unique, and imaginative series."
Read the full review at The Compulsive Reader

"Peterson deftly blends elements of fantasy and science fiction in this action packed romp. Paraworld Zero is a firm foundation for a new fantasy series sure to please young readers ages 10+"
Read the full review at The Faerie Drink Review

Posted by Matthew Peterson at 8:11 PM No comments: