Paraworld Zero hit the top-50 BarnesAndNoble.com bestseller list for a couple of days! Not bad for a first-time author. The past couple weeks have been very busy for me. My publicist booked 18 radio interviews back-to-back (over 5 million people heard me on the radio). NBC in Phoenix did a little blurb about Paraworld Zero (view the segment here). I was the guest blogger on a bunch of websites like FreshFiction.com. I did my first solo book signing at Borders. Well over 100 people showed up, and we sold 70 books. The employees said they weren't prepared for such a large crowd and had never seen this happen before. Finally, I went to North Carolina to be the guest author at some book events at Cameron Village Library and Pomegranate Books. About 30 people showed up at each event. I was also interviewed on a Raleigh TV show called "The Artist's Craft." It will air on prime time in a few weeks, but you can watch it now online here.

My upcoming events include another TV interview in Arizona and some school events (I'm going to California next week as well). I'll be speaking to 500 kids at the first school, so that should be fun. It's a good thing I don't get nervous in front of crowds!
Posted by Matthew Peterson at 10:59 AM 2 comments:

I must first tell you that I created this video trailer myself. I am not a professional. The footage and editing is original, though. The music was created from scorefitter. The characters who modeled for the cover of Paraworld Zero were kind enough to "act" in this video trailer. Secondly, I should mention that I'll probably post an extended version in 2-3 months from now. My original vision was to have a mini-movie with voice overs, acting, etc., but I just don't have the time to create the background music and sound effects right now. The footage and most of the editing is finished. So I hope this 2-minute trailer will whet your appetite for Paraworld Zero and give you something to look forward to when I get the extended version finished. 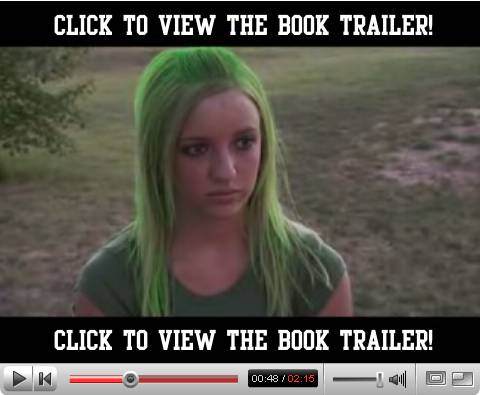 By the way, over 5 million people will hear me on the radio this week. I did 18 radio interviews on Friday, which will be played on hundreds of radio stations across America. Whew! Oh, and one last thing... my niece wrote an essay that won her a $2,500 allowance to see the premier of The Spiderwick Chronicles in Hollywood. Good job, Amanda! I've read the books and I've met Holly Black, so I'm looking forward to the movie.
Posted by Matthew Peterson at 12:05 AM 1 comment:

Old Newspaper Clippings of the Writing Contests I Won

I had totally forgotten this, but I had entered and won a few contests back in 1989/1990 when I was in 8th grade. That's when I started writing my first book "The Sorcerer's Wand" (which I never completed) and later "Parallel Worlds" (which ended up becoming "Paraworld Zero"). Here are the newspaper clippings. Click on each of them to see the whole article. 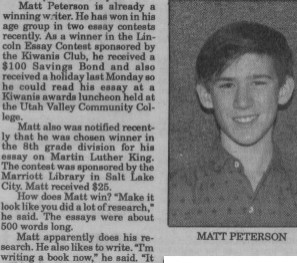 Posted by Matthew Peterson at 10:32 PM No comments:

Paraworld Zero has received 8 reviews from websites so far and 4 author blurbs... and they've all been very favorable towards Paraworld Zero. Let's hope that lucky streak holds up. Here are the latest two reviews I just got.

"The characters are lively and the storyline is fast paced and exciting to read. It's got everything a kid would enjoy reading so you guys should definitely pick this book up..."
TheBookBinge.blogspot.com

"ParaWorld Zero is one of those rare young adult novels that all ages will enjoy ... funny, fast paced, and enough twist and turns to keep you reading all the way to the end. Don't miss this one!"
- SpecFicWorld.com
Note: this review came directly from the editor/publisher of SpecFicWorld.com, Doyle Eldon Wilmoth, Jr.

Posted by Matthew Peterson at 1:16 AM No comments:

I just got an email from "Haruah: Breath of Heaven" saying that they'd like to publish my story "Letting Go" on their site (haruah.com) and print magazine. This is a somewhat sad story that my wife just loves. The story is about a Hong Kong Orchid tree and the lives of the couple who planted it. My wife and I have a Hong Kong Orchid tree in our front yard. I've only seen three others in all of Arizona. Maybe I just don't get out enough!

Speaking of getting stories published, "Yearning to Jump" should be published this month at www.Teen-Age-Magazine.com. That story is mostly autobiographical. If you want to see how crazy I was in high school, then don't miss "Yearning to Jump."

Update: Read "Yearning to Jump" Here
Posted by Matthew Peterson at 1:06 AM No comments:

My Woe-is-Me Attitude Comes Out

I am going through so many stressful things right now, I honestly have a fear that I’ll have a panic attack. I lost $27,000 last month on lucky number nine. Just kidding.... about the "lucky number nine" part (I've never gambled before), not the losing $27 G's. So this month didn't start out too great. My baby who had heart surgery will be on a separate insurance policy next month, which will end up costing more than my house payment. But enough about money issues (I'll be okay financially... especially if people keep buying Paraworld Zero.).

My biggest stress right now is the fact that bookstores are telling me that they're having a hard time ordering my book from the distributors (i.e. Ingram, Baker & Taylor, etc.) because their computer systems (i.e. Books in Print) is showing Paraworld Zero as "unavailable" or "not yet published." Aaaah! Paraworld Zero has been published! I repeat... IT HAS BEEN PUBLISHED! There's a mistake in the computer systems somewhere. So right now, the only option is for bookstores to back order, pre-order or order directly from Windstorm Creative. I know of at least 3 bookstores who have ordered about 75 copies each from my publisher, but that's only because they were willing to go the extra mile to carry my book. What about all the other stores? I'm getting an ulcer just writing this. Hopefully this will get fixed pronto.

My publicist emailed me today to say that she's already scheduled 17 radio interviews next week and some of them are national. A 48-ft billboard is going up on Jan 12th in Utah and tons of ads will commence after that. One of them will be in The New York Times (4 million readers). Thank heavens for online stores like Amazon.com and BN.com. At least people can order Paraworld Zero online. It was ranked #542 at bn.com and #9 in the "Magic and Wizards" category of Amazon.com the first day it came out. Not a bad start.

Boy, wouldn't it be nice if a large publisher came in right now and bought the hard back rights for my book? They could piggyback on all of the promotions that are going on for the Trade Paperback edition. Perhaps I’ll see if I could solicit that somehow. They’d have to act awfully fast. I hear foreign publishers are much more responsive than U.S. publishers. Oh, woe-is-me! Everything will turn out okay. I just need to have faith that it will all turn out okay. I'm clicking my heels right now and saying "there's no place like home... there's no place like home..."
Posted by Matthew Peterson at 11:33 PM No comments: