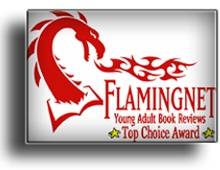 "This book follows the Harry Potter template of wizards and magic, the discovery of great wizardly power, and likely a secret destiny to be fulfilled. It combines Star Wars aspects as well, as we see space ships, laser guns, and a group that wishes to bend the 'paraverse' to their worldview. These are definitely all elements that a young adult would find very exciting, along with the camaraderie among Simon and the new friends [he] makes, some teenage crushes, and some funny scenes within the story. It's a [fast]-paced story with lots of action and character interaction among the kids. Tonya has hair that changes color with her moods, which is an element that I think can really draw in a child reader's imagination. It has plenty to offer to make it an exciting page-turner for its young adult audience..."

Read the full review
Posted by Matthew Peterson at 9:58 PM No comments:

The worst day of my life

One year ago today was one of the worst days of my life. My baby was born... normally a good thing... but during his birth my wife was crippled. A few minutes before he was born I had a sudden chill go through my body, and I felt that something was wrong. There was no indication that anything was amiss. I just had this feeling.

When Jared was born, they immediately flew him to another hospital because he had a couple pounds of extra fluid in him. We had no warning. He had heart surgery 6 days later and was diagnosed with Noonans Syndrome. My wife couldn't even roll over in bed by herself. She was in a wheelchair for a month and then used a walker. During that same 24 hour period, my youngest boy took some poison and I stayed up all night with him. The previous week, I had taken him to the hospital twice because he was throwing up several times a day. A week or so later, my business took a belly flop and I ended up losing over $25,000. Yeah... Ouch!

It's been a year now and things have calmed down... but I'll never forget that fateful day. My wife had already been in the hospital for a month, which meant I was home with 4 little boys and working 20-hour days. The birth was supposed to be an end to our trials but it ended up compounding everything, especially since I had just recently lost my job and insurance. Jared is a sweetheart. He's now one years old, but he can't sit, crawl, or eat by himself. He has a wonderful smile, and he makes us laugh.
Posted by Matthew Peterson at 11:53 PM No comments:

Well, I just got back from TusCon 34 in Tucson Arizona. This was a surprisingly fun convention, despite it being so small. I was on 3 panels:

Chicks and Money and Power and Chicks: What drives you to write?
Matthew Peterson, David Lee Summers & Catherine Wells

You made the world now you've got to write in it, important considerations when making a fictional world.
Matthew Peterson, Dennis L. McKiernan & Catherine Wells

The only bad thing about the convention was the short short notice of what panels I'd be on. They posted some info the day before the convention but then they switched it around when I arrived at the convention. I'm pretty good with impromptu discussions, so it wasn't a big deal, but it would have been nice for me to post it on my website so people would know when to go to my panels.

One thing that was amusing to me was the video game room. One of my friends from Borders, Amy Black, was in charge of the game room. There was a game called Guitar Hero. I haven't played video games in many years. At first I didn't want to play, but I decided to give it a try. Instead of a controller, you use an actual guitar with 5 buttons for strings and a knob to strum. It's very realistic. I only played it twice, but on my second try I actually beat the kid who had been playing it all morning. What's funny is that later in the day I wanted to play again. I felt like an alcoholic getting a drink after a long drought.

I used to be VERY good at video games. I was the kid at the arcade that everyone would crowd around to watch play. When I'd go into an arcade, I'd bring just one quarter with me and play for an hour (they don't make games like that anymore). I used to play the arcade version of Super Mario Brothers (much harder than the Nintendo console version) and beat it without dying once or skipping any levels. Oh, those were the days. 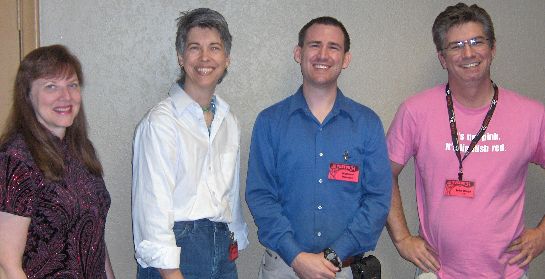 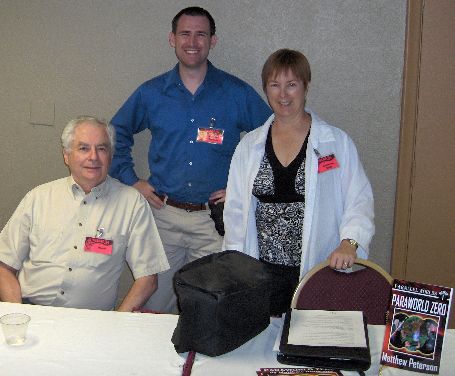 Some may question if miracles really happen. If you ask my wife, she would surely say YES! Two or three weeks ago she put her keys on the back of the car, and I drove a few miles away into the city. We searched and searched but couldn't find the keys. This was quite a pain, since she had just gotten some special keys that couldn't be easily replaced.

She and the kids prayed but nothing happened. Then after two weeks I felt this intense feeling that I needed to pray that she would get her keys back. I realized that I hadn't really put any effort or faith in getting her keys back until that point. The next day or two, someone from CSV (a local pharmacy) called up and said that someone had turned in my wife's keys (the pharmacy was able to track her down from a CSV card on the keys). I hadn't driven anywhere near the CSV, but whoever returned the keys, returned them to the one place that could actually track them back to the owner. My wife is one happy woman now. Miracles do happen.
Posted by Matthew Peterson at 11:11 PM No comments:

Since I'm a member of NothingBinding.com, I was invited to talk on ALL THINGS THAT MATTER, a radio show by Philip Harris on blogtalkradio.com. I didn't get to talk until 40 minutes and 30 seconds into the show. Here's the link to the show.

FYI: the ads are coming! This is the month that my book will start to be promoted. Next month will be much bigger and then January will be crazy.
Posted by Matthew Peterson at 11:09 PM No comments: