Old Newspaper Clippings of the Writing Contests I Won

I had totally forgotten this, but I had entered and won a few contests back in 1989/1990 when I was in 8th grade. That's when I started writing my first book "The Sorcerer's Wand" (which I never completed) and later "Parallel Worlds" (which ended up becoming "Paraworld Zero"). Here are the newspaper clippings. Click on each of them to see the whole article. 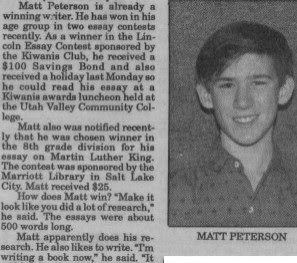 Posted by Matthew Peterson at 10:32 PM